I’ve got Lion. I’m in Finder. I look for “full-screen.” Computer says no.

Apple has made a whole lotta hoopla about all the full-screeniness of Lion. But no love for Finder. What’s the deal? 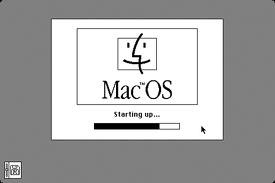 I’m trying to work out something about that Finder icon, that innocuous cubist grin that was the face of Mac for 18 years.

When Apple got rid of the Happy Mac at startup, it caused such a fuss. The amount of reverence inspired by that Happy Mac is stunning. Why?

Macheads had for decades relied on that smile to tell us, “Whatever else might be wrong, your Mac is healthy and ready to go.” And once everything had started up, we would see the Happy Mac throughout the system — inviting, reassuring.

Then, with the arrival of OS X 10.2 Jaguar in 2002, the Happy Mac was gone. The only remnant on the system is the Finder icon in the dock.

Is this, or isn’t this, the face of the Mac?

The irony is that, since the very beginning, the Finder has been the single worst, most uninspiring, most gripe-attractive application ever written for the Macintosh. (All due respect to the creators, who giveth homes to all good documents.) Apple has made OS X the most advanced and stable OS on the planet, replete with security and useful eye candy and productivity enhancers… but Finder has just never evolved. To this day, so many of the people we work with, as comfortable as they have gotten with their Macs, don’t have any solid idea where their stuff lives on their computer.

Perhaps in Lion, Apple made the biggest changes ever, moving the hard drive and other devices to the bottom of the Finder sidebar, and leaving volumes off the desktop by default. These items were cues to confusion: a user saw them, and was immediately reminded of how much they don’t know about their computer. What the heck is a “Macintosh HD”? Why does it say “Macintosh” when I own a “Mac”? What does the “HD” stand for? And when I open “Macintosh HD,” what the hell is a “System” or a “Library”? (Coincidentally, Microsoft’s own file browser has had an even more ugly lifecycle, made no better by the recently announced Windows 8.)

Apple has given priority to showing people their “Places,” a name I have issues with because it further abstracts the situation. My Places are in my Home but when I want a new Place, I go to File > New Folder? Shouldn’t that be New Place? And is a File a Document?

So why don’t they just lose Finder altogether? I don’t know if it’s out of neglect, nonchalance, or fear.

Or loyalty. It could be loyalty. A tiny acknowledgement of the devotées who recognized, from Day 1, the personality and love that went into Apple products.

Maybe Apple feels that files and folders are an arcane idea. The iPhone and iPad are successful because their users don’t have to think in files. They think in contexts, locations: “I go there, to get to that.”

But the laptop and desktop computers that Steve Jobs called “trucks” still work in the old file-and-folder mode, no matter how much Apple is trying to friendly that mode up. Perhaps that Happy Mac still works on people. “Don’t worry about what you don’t know. I’m your friend. We’ll get through this together.” (It is funny that the new iPhones have a voice that actually responds to you in a tone that, while helpful, is not exactly friendly.)

Without question, if they took Finder away right now, I’d be way ticked off. But I’m starting to think that maybe they should be honest with us. Apple doesn’t want to be your friend, and they don’t want the Mac to be your friend. They want you to have an assistant to help you get things done.

I’m reminded of the movie Dave, when Dave meets his lookalike, the American president, who tells him, “Just get rid of that grin. You look like a schmuck.”

So maybe it’s time to say goodbye to my old nemesis Finder, and likewise to my dear old friend the Happy Mac. Apple could give us a new starting point for productivity. And it should probably have full-screen mode.

2 thoughts on “No full-screen Finder”